Las Vegas Roulette comes from the French term for “small wheel”. Variations of wheeled games have been around for millennia. Legend has it that Roman soldiers tipped their chariots over to play games on the spinning wheel as a diversion between campaigns, and others tell of monks bringing a wheeled game back from China in the middle ages. By all accounts, roulette became widespread in Europe during the 18th and 19th centuries, especially in France and Monte Carlo.

American Las Vegas Roulette wheels are divided into 38 evenly spaced slots numbered 0, 00 and 1 through 36. The zero slots are green and the other numbers are either red or black. The evenly balanced wheel, usually made of polished wood, turns on a spindle. The dealer spins the wheel in one direction and releases a small ivory ball in the opposite direction into the outer edge of the wheel, where it circles many times before slowing down. As the ball loses momentum it falls toward the center of the wheel and drops into one of the slots. It may bounce around from slot to slot but eventually it settles into a single slot to end that round of the game.

The fascination of the table game comes from the many ways to place a bet and the excitement and anticipation of watching the ball fall into a slot.

Players make bets against the House by placing chips in various boxes or on the lines between the boxes on the layout table.

The “Spin” button will not become active until at least one bet is placed on the layout. Players can place additional bets, modify existing bets or move chips from one location to another. The “Re-bet” button will place the same amount of chips on the same bets as you had on the previous spin. Once all desired bets are placed, players click the “Spin” button to spin up the wheel and release the ball. After a few seconds, the ball begins to fall toward the center as the wheel slows down. When the ball comes to rest in one of the slots all bets are settled.

The result of each spin is displayed in the tally board on the left side of your screen, with most recent results appearing at the bottom.

Inside Bets are bets placed inside the grid of numbers on the layout table. They include:

Players cannot wager more than the maximum for any particular bet in any one round of the game. Roulette has two sets of maximum limits: one for inside bets and one for outside bets (see Bet Type Table below). Minimum and maximum limits are posted at the bottom center of the screen. Note that you can wager the maximum on more than one bet per spin.

The chips placed on the table layout below give an example of each bet: 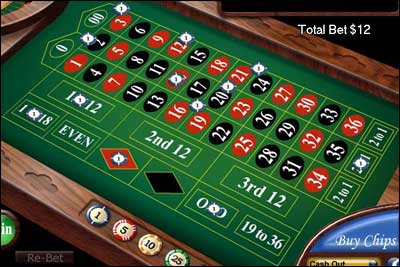